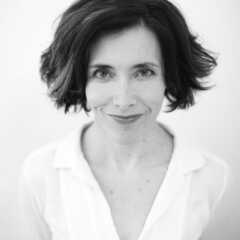 Originally from Chicago, Annie trained as an actor at the Piven Theatre Workshop from the age of 12, and at 18 became a member Chicago’s famous Commedia company, New Crime. The combined vocabularies of the Piven's work in Theatre Games, Improvisation and Story Theatre and the Commedia style of New Crime formed the foundation of her work with The Corn Exchange.

Over the years, the company’s practice and style has grown and morphed, greatly influenced by the wonderful invention and talent of the company’s ensemble players. Annie has directed all of the company’s productions to date, including modern classics, adaptations and original works created in collaboration with writer Michael West, of which she is most proud.